Each child, youth and family within the Nations of Treaty 8 are healthy, safe and supported to reach their full potential.

Providing culturally relevant services that make connections to the culture, language, beliefs and traditions of the First Nations communities within Treaty 8. 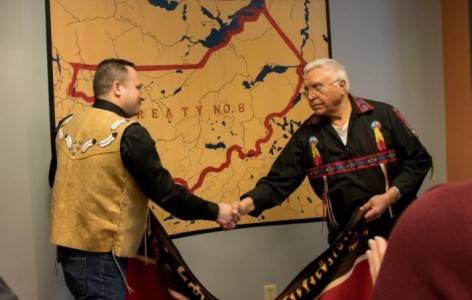 The Treaty 8 Urban Office adheres to the Treaty 8 First Nation Practice Standards. The standards are designed to reflect and encourage the agency’s commitment to innovative practice with a vision of renewing, restoring and rebuilding kinship connections based on the collective cultural identity of First Nations people.

In 2016, the Treaty 8 Chiefs of Alberta unanimously adopted a motion to establish the Treaty 8 Urban Office.  Our organization was created to serve Treaty 8 families both on and off reserve.

The Chiefs believe that Treaty 8 families should be served by Treaty 8 people, who know their languages, customs, traditions, land base, protocols, beliefs, and values.  This is built into every program and service we offer.

Our organization would not be possible without the generous support of the Government of Canada, Department of Indigenous Services.